OK so I just watched “The Silver Linings Playbook” and can I just say that Jennifer Lawrence is one lucky (sexy) bitch!! I mean she gets to make out with just the hottest people alive!!! I mean Bradley Cooper!!! who doesn’t wanna make out with that guy? look at him. LOOK AT HIM!!

I’ve been in love with him since Alias came out, which was years ago!! YEARS!! and don’t get me started on Josh Hutcherson! 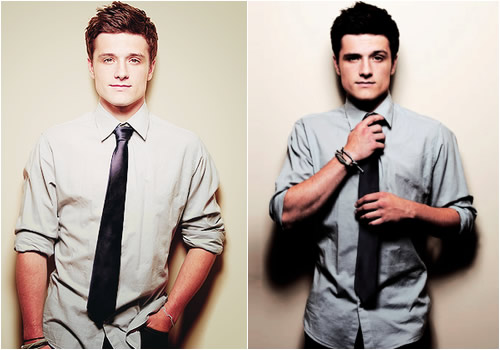 I mean what does a girl have to give to be her? like really id give everything! and you can’t even hate her, because she is fucking amazing and beautiful and awesome! so yeah I wanna be Jennifer Lawrence, if anyone knows a witch or something that can make me her then please comment….

guys tell you that they had a crush on you AFTER you get a boyfriend…..

PS: Paulus I took your gifs…. hope you don’t mind

well its been a considerably long time since I last got a hair cut so I decided to go to the hair salon close to my house to have it cut. nothing wrong with that and I even heard they weren’t that bad; so at around 5 o’clock I got to the place and ask for a hair cut and they make me wait……

which would have been fine with me if I hadn’t been the only customer there…… anyways after what seems like FOREVER the person that was there at the counter and the woman standing beside him ask me to come back at 6:50

so I come back home and go back to the shop around 6:50 but then when I get there I find out that the people had already closed the shop so naturally I am pissed off when I see that they packed up when they told me to come back…

well you know what I hope your business crashes and burns and you told me to come back tomorrow….yeah like that’s gonna happen!!! and if I can help it I will tell anyone that asks me your shop is any good or not…..lets just say I hope you have more customers that the ones I live around and go to school with…..

so this happened a while ago but i just remembered to make a post about it…  at the starting for december I had to carry a big cardboard box to school due to a project. that day i was planning to take the bus but i missed it so i had to walk to school…. as you can imagine it was really uncomfortable…  anyways I was running late (like always! 😉 ) and took my phone out of my pocket but then when i put it in my jacket pocket i dropped and didn’t notice…. later when i went to look for it I didn’t find it so I tried calling it and sending text messages but it was turned off. now you may be thinking that maybe it just ran out of batteries but I had charged it the day before so that’s not possible and it wouldn’t disappear. I didn’t find it anywhere so after like a week or so I got a new phone and had my number transferred and got all the text messages that were send to me during the time that it was missing….. and I think this meme is a perfect example of what it was like so there you go! 😀

In one of my classes I m stuck with these two girls (we’ll call them Bitches from now on, since I couldn’t think of anything else) for a project and today we were having an individual interview kinda thing with the teacher about it. For the project we had to come up with a name for our group then make and put up posters about the informing people of us collecting food, and these girls did NOTHING, I had to do everything from coming up with a group name to the good copy of the poster them putting them up (with the help of one other girl, my group had 7 other people….) and even collecting the food. Not only these girls not do anything they also don’t show up to class and don’t even do their work, I mean bitch #1 asked me if Paris was in London…

and bitch #2 asked me the meaning of dining (eating)

Honestly I have no problem with their stupidity since they never show up to class anyways, though I have to say that I would appreciate it if the teacher didn’t put me in a group full of dumb bimbos…!!! As I previously mentioned that we had to meet with the teacher about the project, we talked about the group and stuff and the teacher said that she noticed that I was basically doing all the work by myself..

after their turn with the teacher class was almost over and I was about to leave when Bitch #1 is like “Gri (me) I M FAILING CUZ OF U!!!!!” and I m just like ‘what the hell, what did I do…????’ then they both try to gang up on me and start saying shit like oh u told her that we didn’t do anything, n blah blah blah…..n I just listen to them for a couple of minutes and well…I… snapped….

I pretty much scared the shit out of my friend that was with me at the time… I mean really??? How the fuck m I the reason that your failing??? Please explain to it me since I clearly don’t get it..!!

(sorry Paulus I stole ur giff but it was just to perfect!) but you know what I don’t care I’ll even apologies… “I m soooooo sooooorrry that I make u miss class even though I NEVER talk to you outside or even INSIDE of class and that I have seen u more smoking on the street corner than I have in class. I m really sorry from the bottom of my heart that you never do any of the assignments and that even when u do, do them u get ones and twos… above all i m soooo sooo SOORRRY that both of you are SO FUCKING STUPID, because obviously that is my fault.

I ended up leaving with a glare that pretty much said

(i want a shirt that says this)

and when I found out that the teacher had put me in a group with my friends….well.. this says it all

Now that I have it off my mind I can finally study for the test tomorrow! 😀